For many years, I’ve been collecting various drum machines, samplers, and other DJ-stye groove-gear,” often using a  piece here or there with my drum set. Gradually, I started connecting them together in various configurations, making some music-making Voltron’s.

Since many of these devices can not only generate audio output, but also receive audio input ( for FX processing or recording for sampling/looping), it became evident that we needed to find a an elegant way to around audio INs and OUTs so that “everyone could send/receive to their full potential”

…so I got a finally got a dedicated audio mixer…but it had to rout inputs and “fold-backs” in stereo.

Background on common Aux busses, and why they’re not the right solution here.

Most mixers have at least one “auxiliary” bus, where signal(s) from various channel(s) can be split and re-combined for either Monitoring or FX mixing.

In monitoring, we want to hear channel(s) sound(s) somewhere else (like a stage wedge or in headphones), so we don’t want Main Mix fader changes affecting those sends, so we use a pre-fader aux send.

in FX mixing, we want to send some channels to effects (like reverb or delay) to give depth to those layers. Since we DO want those “wet” layers of sound to follow the levels from which they are sources (and we don’t generally the initial sound at a fader to be quieter than it’s apparent echo), we send to FX on post-fader busses.

The problem here is two fold:

One alternative comes from where some mixing desks can have multiple  mixes, “sub-mixes” in stereo LR pairs Main “1/2” but also ALTernate “3/4“, or “5/6” and so on…

These are appealing because you traditionally assign a given channel channel to mix group(s) with simple pushbuttons at the channels fader.

The problem with using these is (another) two fold.

So, I’m seeking a design feature that is exceptional and not (yet) with market demand… a mixer that routs more by switch-buttons that gain knobs, with DJ-style idiot-proof lights to avoid calamity.

I found my solution hiding in plain sight…among a cost-cutting design-choice of entry-level Mackie mixers, which save hardware by combining Mute and MixAssign buttons into one. 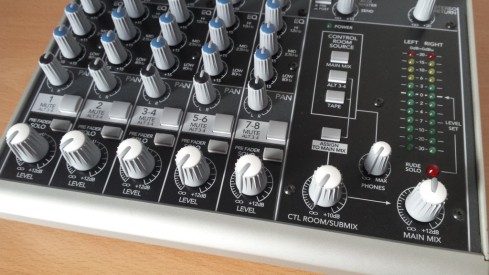 Here, the common channel-Mute button not simply kill the audio signal in that path, but toggle it’s stereo LR busses from Main 1/2 to Alt 3/4. 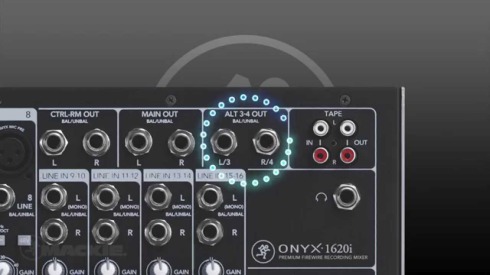 To get this to work,

Since I’m returning the FX path back into a Channel, it becomes IMPERATIVE I do NOT accidentally send the Return back to itself, lest I get (unwanted) feedback noise.

..so I removed the Mute button from the FX Return channel to avoid nasty surprises when trying to get this to work.

I did a proof-of-concept on my Mackie VLZ 802’s, and instantly enjoyed the ease of using buttons (rather than knobs) to toggle sounds in- and out- of a “FX submix”.

However, the Mackie’s Mute/ALTs don’t light up, and that was enough frustration to justify upgrading around this feature-usage.

For that, I found in a Mackie-styled Behringer Xenyx 1204. 4 Mono channels, 2 stereo, with added internal digital FX (reverb, etc) and USB I/O (in case I wanted to record to a computer).

At the moment, I have enough to fill up the XENYX channels with the signal sub-chince

This way, I can use the “mute” buttons to toggle layers from Main mix to diverting to Alt 3/4, where they go through the KP3 Koass pad for entire sub-mixes to get filter sweeps, echo, distortion, etc. This is a game changer for me, makes it MUCH easier to sort and  control layers of sound a performative way.

For sync, the ESX’s MIDI outputs go to a MIDI Solutions QuadraThru 4-way splitter, so timecode gets to the  ER1, the KP3, the KP2, and the GT10 , and all the sequencing and time-based effects stay in sync.

If I wanted to trigger the 202 via MIDI, I’m out of MIDI Ports already… perhaps I’d have to tap the Thru jack on the ER1…

Since I literally do not have the horizontal table-space to keep this project spread out, I invested in the 60” model of the StandTastic A-frame keyboard stand. This thing is ridiculous ! 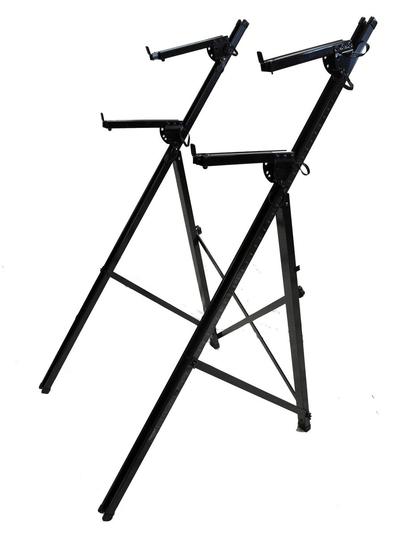 The StandTastic came with sets of “arm-tiers”. Wanting to mount everything in one place, I got an Extra-Tier kit for a 3rd set. Thanks Standtastic.

Unfortunately, as soon as I got the system rocking, I soon moved to a new house, so I only managed to take one pic of this initial setup before the system mutated in the tides of selling off (to move) and upgrading (once re-settled).

If you find this ALTernative usage of mixing interesting or useful to you, let me know !