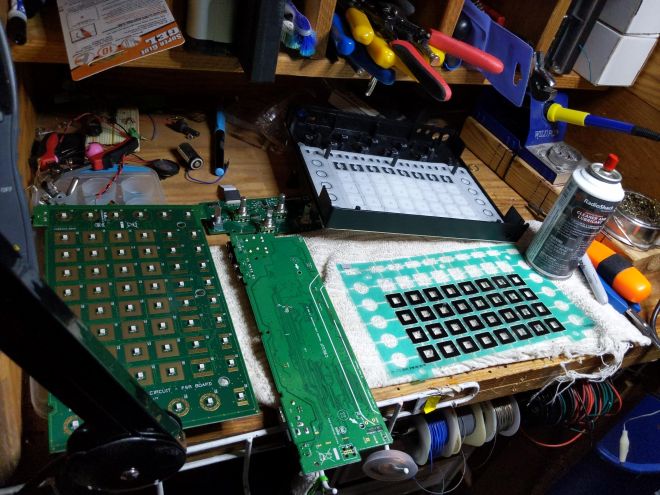 I got a the Circuit by Novation back in Fall of 2018. I was blown away by how simple and flexible the UI was, both for sequencing internal sounds, and as a MIDI note-controller for external gear.

Then, suddenly, it started glitching, at the pads.

It seemed fine if I held it ant an angle, but placing it on flat surfaces made it spazz out Then, about a year, the unit’s pads started falling into glitch-fits, as if I was tickling all over the pads

… as seen in this other person’s video:

I tried to make the best of it at the time, by sampling the garbled noise of the over-stimulated synth-engine into a new noise-composition.

Then, wanting to salvage this clever-and-portable controller/synth, I contacted Novation.

They promptly responded that, since the unit was no longer under warrantee, that I’d have to ship it to them for diagnostics and repair.

…I decided to repair it myself:

Then, after a few months of deliberation, I decided to open it up and fix it myself. I followed this very-well-phographed teardown by BoodyHole (who was just cleaning out beer)…

So, I pulled apart, and found the problem was a very simple fix !

one standoff for the power/battery lines.

At this point, I noticed the two ribbon-cables between the two boards each had a magnetic shield, so I used some cellotape to keep each from being jerked around before proceeding…

it was right HERE that I found the culprit (revealed below).

SideNote: SO HOW do these pads work ? (when they work).

At this point, I realized that the pads of the Circuit work quite differently than most other drum machines I’ve pulled apart. Most others have simple membrane switches for detective IF a button has been pushed, along with a piezo impact-sensor to catch how hard unit was hit. These are analyzed together to assign velocity to the last-hit-pad.

However, on the Novation circuit, there are no piezos.

I pulled a multimeter to check the rings.

Each pad pushes it’s semiconductive ring on a the square bloom of copper tracing.

I couldn’t find a (traditional shaped) piezo in the unit, so I guess the unit might be detective not only IF/when these rings mate, but how forcefully.

The unit might be scanning the (relative) conductance or voltage-division off these pads continually, acting as continuous force-sensing resistor assemblies. This would allows the control we already see from these pads:

…but WHAT WENT WRONG !

As mentioned above, when pulling up the PCB for the MacroKnobs, I heard a metal part fall to the desk.

This little slug of metal had been rattling around between the knob board and the pad board, likely shoring the traces that handle scanning/status of the pads (hence the “storm” of input”).

That metal tab is the anchor for the Kensington Lock slot, a feature that allows you to bike-lock your music gear to the retail/studio environment of your choice at the hazard of forcfully ripping the body to remove it.

The metal anchor fit neatly int the little slot, but was not glued in, so it not only feel inward to the calamity hear, but it could get moved/lost lost whenever someone hazards to open their circuit.

To fix this, I decided to super-glue the metal tab into place before re-assembling. If you EVER consider doing this yourself, be VERY careful to glue the metal to the “top” (black, pad-sided) chassis, and not the “bottom” (blue, rubber-backed) chassis.

Man, removing my mistkenly-applied glue lead to considerable time wasted, but still avoiding the potential tragedy of sealing my Circuit shut… gotta think ahead, and consider what’ll happen when you put it back together.

After getting the unit re-assembled, it worked fine, and hasn’t glitched since (fingers crossed).

Having a second-life of functionality (and a new appreciation for the robust key-action) of my Novation Circuit has got me exploring this thing as a MIDI-keyboard-for-drummer… even looking into how I might store and play chords with and without the sequencer.

Instead of paying Novation

I spent 2 hours, 1 beer, and no money to fix it myself. I’d hope that, if Novation finds that “pad-glitch-ing” units consistently show up with their loose Kensington anchors loose, they should offer a special repair-rebate program… and spend the money to glue down such loose metal parts in future editions.

If you’ve got a Novation Circuit with glitching pads, let me know. I’ll be happy to fix it for or with you.