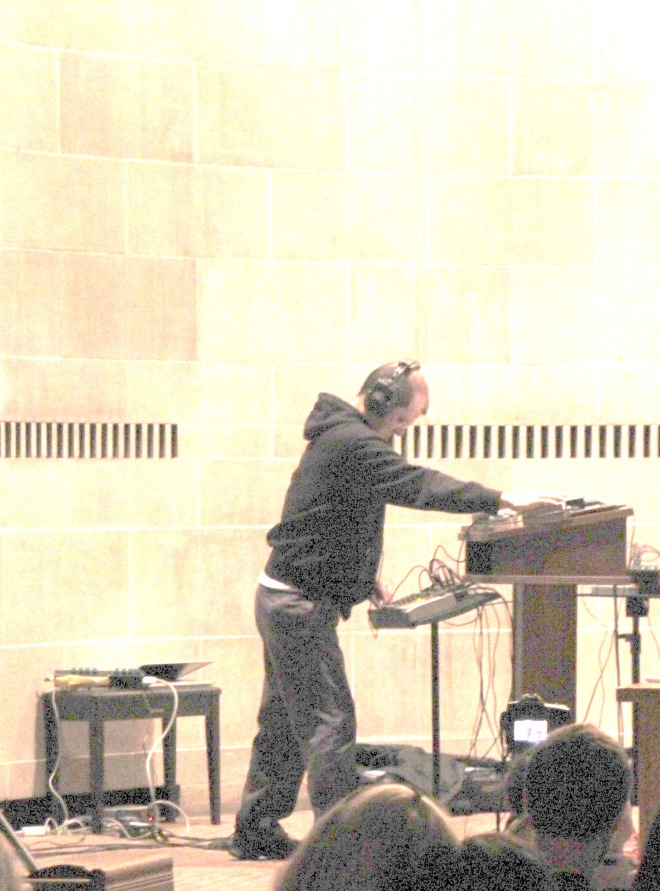 My second live honoraria performance in the TalberTronics Festival at Oberlin College as “Analogs to Nausea,” a live synthesis/sampling re-interpretation of my audio hash-noise soundscape “GusTutorial v3”

The sound-collage portion of this performance comes from back in 2010. While finishing my MS in Electrical/Computer Engineering at Drexel, a lab-mate gave me a recording he made by placing some contact mic on the stomach of his pitbull, Gus, who was violently sick at the time.I was fascinated by the gurgling, squishing noises.

I started editing and warping these sound, and others…

…into a surreal-but-visceral sound collage, called “GusTation” at the time.

We had to fly (to Cleveland) and drive (to Oberlin) to get to the festival, so I had to pack light. I was able to fit all the instruments I needed to perform two pieces into one carry-on bag

The synthesizers played live come from a series of “square wave noise boxes” I’d built back in 2011, which used digital logic gates (AND, NOR, XOR, etc) to get simple square waves into even nastier timbres. Since my college-course with Talbert not only about the concepts of amps and filters in “analog” circuit design, but also about binary logic in “digital” circuitry, I was excited to share and perform with these.

These synths series started in 2010, when I was in Wormrider, and keyboardist Dan asked if I could build something like his EF102 Photo Theremin or his EF101 Dual Oscillator from noise-box maker Electro Faustus.

After a quick study of the EF circuit boards, I designed The Left HandShake, a box with 2 knob-pitched VCOs (4046 chips), each with adjustable-depth pitch control from respective photo-cells.

The wide-sweeping pitches and two-oscillator timbres of the early draft can be seen in the “progress report” video below.

I gradually iterated and refined the design of TLH to be more robust and more expressive pitch control, bringing V 3.2 which was used on this performance.

Along the way in 2012, I made a one-off experiment in combining 2 knob-pitched square-wave oscillators (From a CD40106 chip) with switchable routing through NAND gating and/or XOR-based ring modulation, with a 3rd knob-controlled oscillator re-gating each two-oscillator. The resulting synth was an absolute mess of wires between board and panel, and it had a unique tendency to only make noise in limited crashing pitch-sweeps triggered by switches in the oscillator routing, suggesting the oscillators were always eventually locking into phase and stopping each other.

While I’d built the synth to set drones and adjust wave-timbre proved to only respond to violent switching, so I replaced the toggle switches with push-buttons, and it became a “slap at it and see how long it cries” box, dubbed Right UpperCut.

As I was tweaking and building the above synths, I was reminded of the squawking, shrieking, and gurgling noises from “GusTation,” and would sometimes “practice” with these noise-boxes by trying to imitate sounds of that recording.

Thus, to perform for TalberTronics 4th concert as a solo act, I edited GusTation into a longer form with some low-points, into “GusTutorial”

My live setup here had the 2 noise-boxes and the phone (playing the .WAV) into a mixer, routing to echo effects and slow-down/reversal sampling on the Kaoss Pad.

While the piece was conceived in the dry headspace of headphones, it was fun to improvise in the washy reverb of Fairchild Chapel.

TiMaRA professor Tom Lopez sent the following footage below, shot and edited by his department.